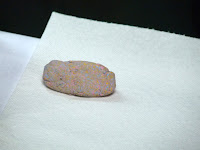 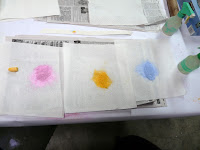 It was a labor-intensive day! The colors from yesterday were used to create new sticks that had bits of color side by side. Not mud, which would have happen if we had stirred the wet pastel together.

Based on our preferences and curiosities, we mixed the special pastel sticks you see in the third photo. They will dry and be ready for use soon.

What I hope will happen is that I will be able to use one of these new Crumble Color pastel sticks to show the "brushwork" or directionality of my stroke as well as the value that is right for the area. As I mixed various color combinations for these sticks, my thoughts went to the new paintings that their use will allow.

Once they are dry, we can test them. With the stroke should come irregular lines of color. Broken color. I can hardly wait!!
Posted by Katherine van Schoonhoven at 12:03 PM 3 comments:

Pastel making with Kitty -- Day One 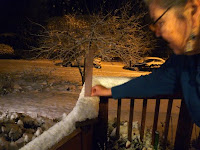 Three and a half inches of snow fell at Kitty's while we were busy making pastels!

A day of pastel making, but this was just part one of a two day project. 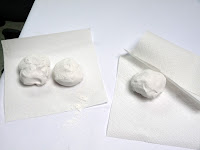 Yesterday was a great day! It was day one in a two day adventure at Kitty's studio making very special pastels. First we started with pure colors and their values. Hansa Primrose. Azo Yellow. Quinacridone Magenta. Napthol Red. Ultramarine Blue. Pthalo Blue. We mixed and rolled and formed these beautiful pure colors.

While we worked, we didn't really notice that the temperatures were dropping outside. It started to snow around 4:00 and what was at first just a few flakes, quickly became a good snowstorm right at rush hour! People abandoned their cars in the middle of roads. It took four hours to travel ten miles! I was snug at Kitty's house. Three and a half inches fell in Southwest Portland.

I don't drive in the snow. Really. Hey, I'm still a bit of a Valley Girl, I guess. My dear husband picked me up at Kitty's place later that evening.
Posted by Katherine van Schoonhoven at 9:02 PM 2 comments: 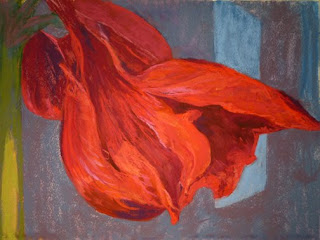 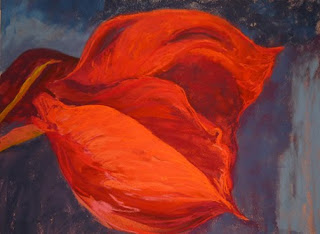 I am reading "de Kooning: An American Master" by Mark Stevens and Annalyn Swan, the 600 page biography on the great modern artist. Even though I have only read about a third of the book, I am enthralled by the man. And inspired to "work as though every stroke might be your last." Words to paint by.

Christmas is almost over -- but it was great!

A couple of days spent with my sons and their wives, a Christmas day spent with good friends, lots of time on the phone to talk to family and friends ... Christmas is almost over now and mine has been wonderful.

Special thanks to all of you who stop in to read and sometimes comment on what you see here. It makes the world feel just a little smaller.

Posted by Katherine van Schoonhoven at 10:53 PM No comments: 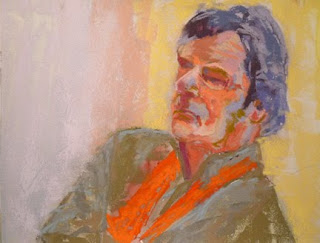 Labels: every family has at least one, pastel figures 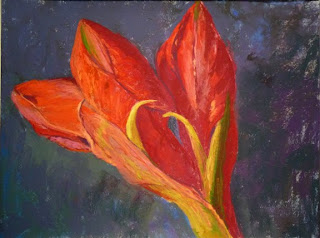 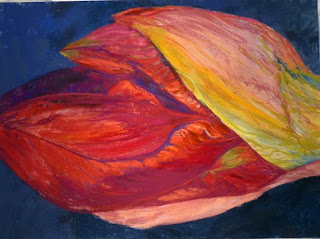 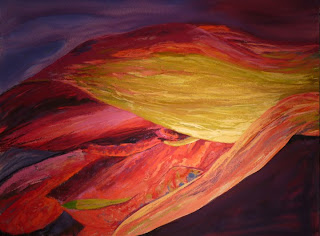 The buds shed their papery covers and slowly unfold themselves with grace.
Posted by Katherine van Schoonhoven at 5:28 PM 1 comment: 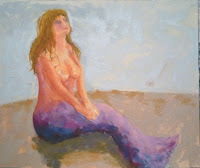 My life caught me unawares earlier this year when I accidentally fell in the cold water of Puget Sound. It is easy to pretend to be unchanged by the event, especially since it happened five months ago. Easy to smile and nod and laugh, to tell the story of my many minutes in the cold water. To act as if it is barely a blip on the screen of my life.

Some days, that is true. It is but one incident in a life filled with incidents.

But other days it feels important. Today was a day like that.

Without trying to suppress it or reframe it or ignore it, today I honestly responded to my feelings with my painting. I won't begin to try to figure out what that means, but I will just rest with it.

My thoughts flow as the melody of this tune. Melancholy and sweet. Hopeful and quiet. It is a good day. 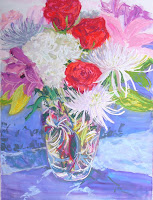 Gallery 2121 will be open for receptions for an exhibit entitled Hearth & Home on Saturday, December 19, 11am - 6pm and Monday December 21, 5pm-8pm to celebrate a limited time art exhibit and sale of picturesque paintings and platinum palladium photography at:
2121 SE Belmont Street, Portland, OR 97215

Six artists and one photographer reflect a broad range of representational styles and approaches that capture the beauty and diversity of our surroundings. Paintings of traditional and urban landscape, marine art, contemporary figures, animal portraits and mixed media are all incorporated into an exhibit that aims to showcase this season of hearth and home. 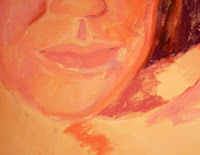 As I painted today, I marveled at the complicated shapes that form a face, that form a mouth. And I wondered, "What words will she speak, when she does? Will they be English or some other language? " 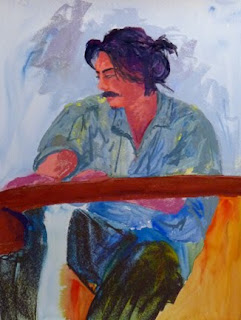 There he sat, from the deck high above me. Regal in his bearing, but still a pirate. He would take what did not belong to him and feel no regret for the taking. A primitive. Pleasure seeker.

Looking down at all of the pretty girls walking past as if he would eat the most delicious for his snack.
Posted by Katherine van Schoonhoven at 5:21 PM No comments:

It was a great opportunity to play with abstraction as I worked on my third entry for "Subject to Interpretations." If you haven't see it yet, just click on the title and that will take you to the blog.

Instead of painting the boats, I zoomed in on the sails and focused on how the wind and light defined their forms.

The Portland Plein Air and Studio Painters have tried to maintain our group painting efforts through the cold weather months by creating winter projects. This year, I designed the project in the form of a new blog. Twice a month, I post a photo reference (the "Subject") and all of the artists from the group can paint from that and I post the photos of their paintings (the "Interpretations"). The holidays may keep many artists from painting in December, but this is my entry.

I remember watching the Olympia Sailing Club out with their boats on a race in Budd Inlet last summer. Their bright sails in the full sun were graceful as they caught the wind and light and I took many photos of them and sketched them as they zipped past. And now, I look forward to seeing how the other interpret the scene.
Posted by Katherine van Schoonhoven at 7:50 PM 1 comment: 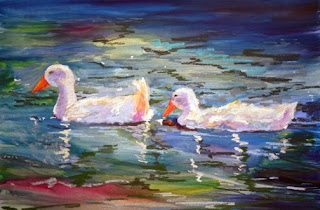 Maybe not chasing the light, but I am certainly studying the light more carefully since critique last week. This painting is done from a photo I took in Palm Desert on a sunny January morning.
Posted by Katherine van Schoonhoven at 1:06 PM 1 comment:

pastel with water under painting

Temperatures in the 20s and 30s make me look for warm subject matter. This palm tree painted from a photo I took in Temecula, CA, along the Butterfield Trail.

I used a piece of Wallis paper that had a crease in it, making it the perfect support for a quick study. First, I did a gesture drawing with graphite. Then I lightly put in pastel in big blocks of color and value. I used a wet brush to push it into the paper and soften the edges. Once it was dry, I added a bit more pastel on top.

Baby, it's cold outside! Perhaps some snow in the forecast!
Posted by Katherine van Schoonhoven at 8:48 PM 2 comments:

Paint. Paint. Paint. I can be driven when I am pursuing art. Push. Push. Push. Things flow and it's a joy to be in the studio or out in the field. Then, without warning, I am dry. Parched of ideas and energy. Not that I love art any less. I just need to be recharged.

A day trip north to the Seattle Art Museum to see the Michelangelo exhibit and Calder exhibit. To stand in front of Michelangelo's drawings of the human form that date back to the mid-1400s is nothing short of amazing. It made me want to draw and to draw more. One hundred times or more. There's a nice series of lectures about this exhibit on the SAM website if you are interested in seeing/hearing more about this exhibit.

In another special exhibit, the whimsy of Alexander Calder. I LOVED the cow. A bit of wire bent like a three-dimensional contour drawing. Udders and all. A delight!

Of course, no trip to SAM is complete without adequate time to admire the Sargent portrait of Leon Delafosse and the Robert Henri portrait of the dancer. All four of us stood for a long time looking at these two masterful paintings. We would walk up close to inspect a brush stroke, then step back to see the strokes come together to form a hand or the fold in the skirt. Close again to see how he did that, back again to admire the perfect effect.

The timing was just right to zip over to the hills of Kirkland and peek at Casey Klahn's "River Series" exhibit at Northwest University. It was lovely to see in person the paintings that I have admired on his blog. I enjoyed that very much.

Then, a short drive down the hill to the Howard Mandville Gallery for a look at their small works show. We watched the sun set over Lake Washington, the Seattle skyline in periwinkle silhouette
with a lemon yellow and soft orange ground.

Now I feel full to the top. And I'm ready to paint again.

How to you replenish your artistic energy?
Posted by Katherine van Schoonhoven at 5:12 PM 2 comments: 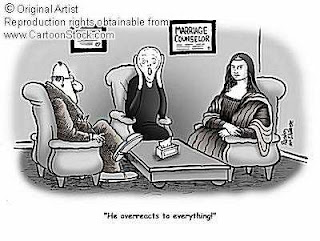 Well, in the interest of not overreacting, I will laugh and say that Structured Critique was tough.

I brought in five paintings. I missed the mark with most of them. Distressingly so. I thought that at least one of them would get a "Wow, that's pretty good" comment. None did.

Kitty Wallis, my mentor and the leader of Structured Critique, observed that I did not observe and paint the light pattern consistently, so that ruined the effect of form and space of my figures. I knew that something was missing in my paintings, something that was keeping them from making the viewer want to look at them longer. Now I know what was off.

While negative feedback is never pleasurable (unless you are a masochist), it is good. Good to hear the truth. And I know that I can always count on Kitty for the truth.

I have a new painting on the easel already, and you can believe that I am looking carefully at the light pattern. I have every intention of getting it more right next time.
Posted by Katherine van Schoonhoven at 7:16 PM 4 comments: