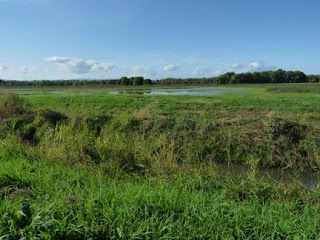 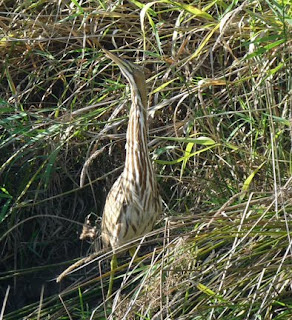 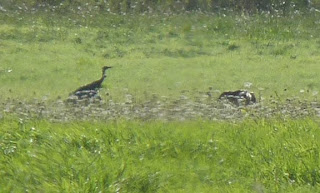 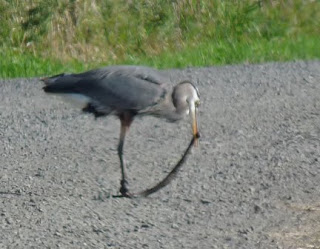 the heron and the snake, a fable

It was a beautiful, sunny day as I crossed the slough on the one-lane wooden bridge and entered Ridgefield National Wildlife Refuge. The volunteer at the guard shack told me that it was still a little early for ducks and cranes. "It's just not been cold enough to bring them down here." But, just the day before, a few Sandhill Cranes were seen in the area. I had high hopes.

Sandhill Cranes are slightly larger than Great Blue Herons and have a distinctive call. They tend to avoid people even more than the herons do, so I wasn't surprised that I heard them before I saw them. Listen to what I heard here. When I took the photo, I also noticed a coyote nearby. He did not attack the birds while I was watching, so maybe he was just considering his options. Over the next several weeks, these early cranes will be joined by their buddies and will fill the skies and wetlands with their song. I will be watching.

I was excited to see the American Bittern today. Talk about a guy who hides well, his feathers and skinny profile make him hard to see in his tall grass home. I feel lucky to have seen him.

The last photo shows a Great Blue Heron with a snake. I came in on this story at the mid point, so I can only imagine the beginning of this morality play. When I arrived, the snake was alive and had its tail wrapped around the heron's leg several times. The heron had the head in its bill, but couldn't seem to bite down hard enough to kill the snake. Whenever the heron let go of the snake, the snake turned and struck the heron until the heron grabbed that head again. The heron kept pulling on the head, stretching out the snake's body, trying to free his foot, but the snake, as long as it was alive, would not let go. It was fifteen minutes later that I saw the coils of the snake's tail let loose the heron's leg. The snake was dead. And then the snake was a snack for the heron. It makes me think that there must be a fable, a story with a moral, of the Heron and the Snake. Maybe I'll have to write that one.

Still painting every day. Today's painting was so bad I couldn't post it. But, I'll try again tomorrow.
Posted by Katherine van Schoonhoven at 4:47 PM

No painting ...and a snake fighting a Heron. hmm. lol.
Love the photos (uh, except for the snake one, but it is was it is, I know.
Did you paint in the studio or at the Wildlife sanctuary?

Oh I envy you! Even the snake bit..and yes, Nature can be cruel--have never heard of the bittern--thanks so much for sharing!

The snake was interesting but creepy. There's no way I wanted to get closer until I knew it was dead. Dead and eaten, as it turns out.

I painted in the studio but soon I will try oils en plein air.

I love the birds! Thanks for the comments.

Why do I just not believe that any painting you did was so bad . So no painintg but some marvellous pictures thanks .

According to Native American totems...

Perhaps the story is your story.

Thanks, Ralph. You are kind. I'm kind of crazy about birds. I carry a pair of binoculars and an Audubon Field Guide in my car, just in case.

Sam, you say the most interesting things! I will think on what that might mean.

I know your creative mind can come up with a story. If not you, then I just know Ralph has a story just waiting to be related to this real life event. Great pictures!